COLOMBUS (Ohio) – Every year, millions of people are treated for cystitis, but despite its prevalence, the disease is still a scientific mystery. Now a research team from University of Southern Denmark has succeeded in identifying how the bacteria responsible for the disease cause the disease to develop. This is a cause for optimism that more effective treatment methods can be developed.
You feel the urge to urinate every two minutes, but you can only manage to squeeze out a few drops, and it stings terribly. Almost every woman has experienced cystitis, and some even experience it as a recurring annoyance.

In cases of a bacterial infection, the doctor may prescribe antibiotics. But these bacteria have a special ability to survive this treatment and cause a new infection. Now a Danish research team is reporting that they have made a discovery that potentially could lead to a new and radically different method of treatment.

Systematic monitoring of the bladder wall

The research team has developed a model that enables systematic observation and analysis of bacteria from each step in the bacteria’s invasion of the bladder wall.

“Now we know important details on how the bacterium enters the phases that poses a threat. And we know how we can potentially prevent the bacteria from reaching that stage” explains head of research Jacob Møller-Jensen from the Department of Biochemistry and Molecular Biology at the University of Southern Denmark.
The research team also consists of Postdoc Surabhi Khandige, Department of Biochemistry and Molecular Biology, as well as participants from the Department of Clinical Microbiology at Odense University Hospital, led by senior researcher Thomas Emil Andersen, Department of Clinical Research.

The bacteria attach themselves to the inside of the bladder

Cystitis is usually due to special E. coli bacteria, which are able to invade cells in the urinary tract. The bacteria attach themselves to the inside of the bladder and grow. In response, the bladder rejects the outer layer of cells and thereby flushes many of the bacteria out in the urine. This produces the cloudy urine that is typical of a urinary tract infection.

However, some E. coli bacteria are cunning enough to avoid being flushed out. In a fascinating way, they alter their form and become extremely long (a process known as filamentation). This improves their ability to attach themselves to the bladder wall and thus avoid being flushed out. This in turn sets the stage for the bacteria to spread further and to take over and destroy one bladder cell after another. Finally, the bacteria reach the bottom layer of bladder cells, which they penetrate and then stop dividing. At this stage, neither antibiotics nor the body’s immune system can reach the bacteria.

“Scientists have long known that this bacterium is capable of some very specific tricks, including changing shape during the infection. But until now it has been difficult to discover how the bacterium manages this”, explains Surabhi Khandige.

“The bacteria’s ability to form long filaments is crucial to their ability to spread and thus for cystitis to develop”. In order to study the bacteria’s behaviour, the researchers constructed an artificial bladder model. The principle of the model is that the inside of a small chamber is lined with bladder cells, and when they have established themselves, human urine is sent into the chamber, thereby producing an artificial bladder. Then the E. coli bacteria are sent in and their activity is monitored.

“We studied the course of the infection through a microscope and we collected and studied bacteria from the various stages of the infection process. This enabled us to identify the mechanism that causes the bacteria to become filamentous. This is the first time such a detailed insight has been achieved, and it provides obvious opportunities to control this bacterium’s activities and prevent the initial stage of the infection”, says Jacob Møller-Jensen.

Mice did not develop cystitis

In the laboratory, the researchers tried to deactivate the mechanism that usually makes the bacteria long and thin. The ability of the bacteria to cause cystitis was then tested in mouse studies.

“Not only did we see that the bacteria were unable to cause a robust infection. We also saw that the bacterium’s ability to penetrate into the deeper layers of the bladder wall declined sharply. In other words, when we deactivate the mechanism, we undermine the bacterium” says Thomas Emil Andersen, and continues:

“This offers hope that we can devise new treatment strategies to prevent problematic and recurrent urinary tract infections”.

Salmonella behaves in the same way

E. coli is not the only bacterium that uses filamentation as a survival strategy. The same phenomenon can be observed, for example, in Salmonella and Klebsiella, which today are resistant to many antibiotics.

Picture below: E.Coli in 3D 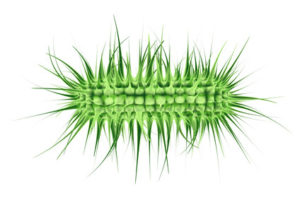 “It will be interesting to examine whether these bacteria can be controlled in the same way”, says Thomas Emil Andersen.

The researchers have published their findings in the journal mBio and at the conference Clinical and Scientific Advances in Urinary Tract Infections Conference, 26-28 August in Columbus, Ohio.

Creapharma.com asked a few questions to the Prof. Jacob Møller-Jensen.

Creapharma.com – Do you have any idea of the new treatment strategies (you mentioned in your press release), could it be new antibiotics for example?
Prof. Jacob Møller-Jensen – In the face of growing antibiotic resistance, we as a scientific community need to think differently when it comes to combating microbial infections. Rather than aiming for bacterial eradication, one should try to target virulence traits instead. Such an approach would be expected to lead to less resistance development. See e.g. Cegelski L et al. Nat Rev Microbiol. 2008 Jan;6(1):17-27.

In our recent study we report on a mechanism that allows uropathogenic E. coli to extend their cell length by more than 100 fold, thereby increasing the FimH dependent adhesion to bladder cells dramatically. By inhibiting filament formation one could potentially eliminate the ability of UPEC to resist clearance through bladder cell exfoliation. Our mouse model experiments certainly support this idea.

2. What do you think about D-mannose? Some estimate that D-Mannose can fasten to the FimH protein of E.Coli bacterias?
Anti-adhesive compounds such as mannosides are definitely a promising way to treat bladder infections. I believe compounds developed by Scott Hultgren are being moved forward to clinical trials at the moment.

3. A study published in Nature Communications in March 2016 from 2 Swiss institutions (ETH Zurich and University of Basel) showed that thanks to the FimH protein of E.Coli, these bacterias can fasten to the bladder cells and “swim” up in the bladder. Does your study shows similar mechanisms or would it be rather new insights that you discovered?
As mentioned above, we have mainly been focusing on UPEC morphology. We know however from a previous study (Andersen et al Infect Immun. 2012) that the bacterial filaments are completely covered with type 1 pili (with FimH) over their entire length. Filamentation would therefor increase FimH-dependent adhesion manifold. So one could argue that filament formation is functionally linked to fimbrial adhesion. 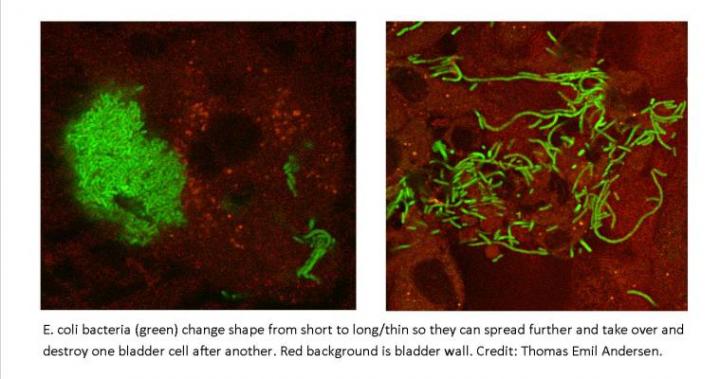 4. How did you manage to desactivate the bacteria (E.Coli), did you use genetic modification bacterias, a special drug or molecule that blocks the bacteria filamentation, if yes which molecule did you or your team used?
We inactivated E. coli filament formation by deleting the gene which is responsible for blocking cell division. The resulting mutant was severely attenuated in a murine cystitis model and was cleared in less than 48 hours. This was in contrast to wild type bacteria, which were capable of establishing a long-term infection.

See also : Symptoms of cystitis might be caused by bacterial infection, interview