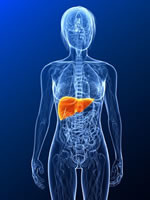 Hepatitis is a disease that affects the liver; there are several forms of Hepatitis (A, B, C, etc.). Here is our full report on this disease which can lead to serious complications.

Principal differences between hepatitis A, B and C.

Hepatitis is an acute or chronic inflammation of the liver (see picture). We should really talk about Hepatitises (in the plural) as it has numerous causes. Hepatitis can be viral, toxic, medication-related, alcoholic, bacterial, or parasitic (7 different forms of Hepatitis have been identified to date). The different causes of hepatitis are explained in detail in the section causes of hepatitis. Hepatitis is generally acute but it can become chronic if it lasts more than 6 months.
The symptoms of hepatitis generally vary depending on the cause of the disease, but some signs are common to all forms of hepatitis, such as icterus (jaundice), dark urine, light colored stools, nausea or a liver that is painful when touched.
The way hepatitis is transmitted also depends on the origin of the hepatitis, which is why this shall be explained in detail in the section causes of hepatitis.
The disease can be acute and then spontaneously improve in most cases, without leaving any lasting damage. However, hepatitis that is poorly treated can become chronic and lead to cirrhosis of the liver of even cancer.

– In the USA, it is estimated that around 30% of the population have ever been infected with Hepatitis A, around 5% of Hepatitis B, and around 1,7% of Hepatitis C.

As mentioned in the section hepatitis definition, this disease can have many different origins and so has several forms: viral, toxic, medication-related, acute alcoholic, acute bacterial, or parasitic.
The forms of viral hepatitis, called A, B, C, D or E are the most common. Other viruses can also cause this disease. This is the case with the Epstein-Barr virus and the Cytomegalovirus (which infects blood cells). Hepatitis can even arise during an infection of glandular fever.
– Hepatitis A is caused by a virus A. Contamination with this virus occurs through the digestive tract, notably from food and water that have been contaminated by feces as well as the consumption of seafood. The incubation time is between 15 and 4 days. Hepatitis A is the most harmless form as it is the only one that does not progress towards chronicity. Nevertheless, in certain elderly patients, it can prove fatal. Note that it is sometimes called “travelers hepatitis” because it is often tourists or travellers that contract this disease, in particular in countries in the South or in the East.
– Hepatitis B is caused by virus B, which is transmitted through the blood (contaminated blood transfusions or use of contaminated needles among drug addicts in particular), through saliva, or is sexually transmitted. The incubation time is between 30 and 180 days. Hepatitis B can become chronic and transform into cirrhosis of the liver or cancer.
– Hepatitis C is caused by virus C, transmitted through the blood (transfusions, haemophiliacs, blood dialysis, drug addicts, sexually transmitted or, possible but rare – placental transmission). The incubation period is between 30 and 100 days.
– Hepatitis D is caused by virus D, which is transmitted through the blood or sexually. In order for Hepatitis D to develop, it requires the presence of the virus for hepatitis B. It may be a co-infection (the person becomes infected with two viruses, B and D simultaneously, or a secondary infection (the person already a carrier of virus B contracts virus D at a later date). The incubation period is between 45 and 180 days. This form of hepatitis almost exclusively affects drug addicts. In 80% of cases, hepatitis D becomes chronic and rapidly progresses to cirrhosis.
– Hepatitis E is caused by virus E, through orofecal transmission. It is often acute and benign with no chronic form. However, mortality is highest among pregnant women, where the rate can reach 20%.
– We can also note hepatitis F and G, but they are much rarer in our view.
– Toxic or medication-related hepatitis is induced by the ingestion of certain substances, medicines or otherwise. These last two forms provoke liver damage that can sometimes be massive. This is the case with amanite phaloid (a poisonous mushroom also known as death angel). It is important when taking certain hepatotoxic medicines, such as paracetamol, to take them in moderation and to follow the prescribed dosage.
We know that a drug commonly prescribed for cholesterol, atorvastatin (Tahor®) can in rare cases (between 1 in 1000 and 1 in 10,000 cases) bring about hepatitis. You should then stop treatment as soon as possible.
– Acute alcoholic hepatitis is a form of toxic hepatitis, brought about by alcoholism. It leads to cirrhosis and massive liver damage.
– Acute bacterial or parasitic hepatitis can arise after certain illnesses, such as tuberculosis, brucellosis, leptospirosis or bilharzia. Certain opportunist germs can also bring about acute bacterial hepatitis in aids-sufferers who are already immune-deficient.
– Chronic hepatitis. In general, their causes are similar to those of acute hepatitis. As mentioned in the section definition of hepatitis, chronic hepatitis is one lasting more than 6 months. Chronic hepatitis can be caused by viruses (especially hepatitis B and C) as well as medicines. Let us note the existence of a chronic form of hepatitis called auto-immune hepatitis, found in young women in particular. In this type of disease, auto-antibodies are produced, attacking the liver.

As hepatitis can have several causes, here are the different groups of people at risk:
– Travelers (hepatitis A, B and C) when engaging in risky behavior such as consuming contaminated water or unprotected sex.
– Drug addicts (hepatitis B, C and D) when using dirty needles.
– People with immuno-deficiency (AIDS sufferers etc.)
– Alcoholics
– Healthcare professionals
– Those having undergone multiple blood transfusions
– Those having undergone blood dialysis
– People engaging in sexual behaviour that places them at risk (unprotected sex, for example).

As explained in the section
Hepatitis A: In general, the acute infection will go unnoticed in children, which is not the case for adults (in two thirds of cases).
Its progress is divided into 3 phases:
pseudo-flu-like symptoms, including fatigue (asthenia).
Hepatitis B: In general, only 10 to 25% of hepatitis B cases display symptoms. The symptoms are the same as those for hepatitis A.
Hepatitis C: In general, only 5 to 10% of cases of acute hepatitis C display symptoms. The symptoms are the same as those for hepatitis A.The hepatitis C virus will usually take 30 years before destroying the liver. Nevertheless, those with HIIV (Aids) should be especially careful as the time taken can be much shorter in these cases.
Hepatitis E: in men, it is often an asymptomatic form of hepatitis and usually harmless (intense fatigue, digestive signs, jaundice and sometimes fever).
Acute alcoholic hepatitis: can be asymptomatic. However, the most frequent signs are fever, an enlarged liver and icterus.
Chronic hepatitis: In general, the same symptoms are observed as in the more or less serious acute forms of hepatitis.

The diagnosis for the various forms of hepatitis is confirmed by
– Blood samples, where a massive increase in liver enzymes (transaminases) is identified due to destruction of hepatic tissue.
– Blood tests (serology), identifying the virus in question.

For alcoholic hepatitis:
– Struggling against alcoholism

2. Curative treatments. The treatments also vary depending on the form of hepatitis. For viral forms of hepatitis from which sufferers generally recover spontaneously after an month or two, treatment essentially involves rest and total avoidance of alcohol which would put additional strain on the liver. A feeling of general fatigue may continue.
– Hepatitis A: has no chronic form; treatment involves a rest.
– Chronic hepatitis B: alpha interferon.
– Chronic hepatitis C: combination of alpha interferon and ribavirin. We should note that not everyone necessarily requires treatment. It is the doctor, of course, who will decide which strategy to adopt to fight this infection.
At an advanced stage of the disease, if there is liver cirrhosis or cancer, a liver transplant may be the only treatment.

Phytotherapy hepatitis
Below you will find a list of medicinal plants that have a positive effect on the liver (hepatoprotective), which can help overcome hepatitis:
– milk thistle
-artichoke, to be taken in the form of pills of capsules.

Did you find this article useful?